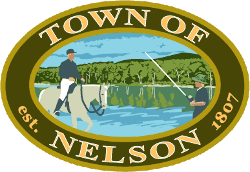 Zoning Board of Appeals

The Board of Zoning Appeals shall have the power, duty and authority to hear and decide variances, appeals, special exceptions, and map interpretations, and to exercise such other powers as may be granted by New York State law and the Town of Nelson Town Code.

All Zoning Board of Appeals meetings are the Third Tuesday of each month at 7:00 p.m. at 4085 Nelson Road, Cazenovia NY. (Town of Nelson Office) Note: The ZBA meets as needed. Please call the Town office at 315-655-8582 ext 1 to check with the Town Clerk if a meeting is scheduled.

The Zoning Board of Appeals members:

What does the ZBA do?

The Town of Nelson has established and enacted a set of laws called the “Town of Nelson Land Use and Development Law”, more commonly referred to as our Zoning Laws. These are the rules that regulate what can and cannot be done on land parcels in the Town. There are rules about what types of uses are allowed in certain areas (zones). In the Residential zones, for example, certain types of business uses are not allowed – particularly those types that would detract from the residential character of the zone. And there are rules that place restrictions and/or limits on construction location and size. For example, each zone has minimum “setback” distance requirements so that a building cannot be constructed too close to the road, or too close to the neighbors’ properties.

But in our free country, doesn’t a property owner have the right to do whatever he/she wants with his/her property. Well, yes … and no. The Fifth Amendment of our U.S. Constitution (the same one that states you can’t be forced to incriminate yourself) states that “No person shall … be deprived of life, liberty, or property without due process of law; nor shall private property be taken for public use, without just compensation.” Some people would argue that when the government tells me I can’t put a commercial garbage dump on my property, or that I can’t build a 50-foot tall house on my lakefront property, or that I can’t build a shed one foot from my side lot-line, then they are in effect “taking” (at least some part of) the value of my property away from me – and without any compensation! Well, that argument has been considered thoroughly and meticulously by Federal and State courts, and the conclusion long ago was that zoning laws such as ours are constitutional, if – and only if – certain systems and procedures are in place to ensure that the rights of landowners are upheld.

In New York State, one of those systems that are required to be in place in any town that enforces zoning laws is a Zoning Board of Appeals, or “ZBA”. Any landowner who is denied in his/her application to construct or use his/her property in a certain manner has the legal right to appeal that denial to the town’s ZBA, and ask for an exception to be made. That exception is called a “variance”. And New York State law defines quite precisely the procedures, issues, questions, and tests the ZBA must consider in deciding whether to grant or deny that requested exception, or “variance”.

There are basically two types of variance requests that come before the ZBA from landowners (or sometimes their builder or other representative) who have been denied a building permit by the Town’s Code Enforcement Officer.

The first type of variance is called an “Area Variance”. This is the case where the denial was due to some “dimensional” restriction, such as a required minimum setback distance (front, rear, side, etc.), maximum building height, maximum lot coverage percentage, minimum parking requirements, etc. The rules governing Area Variances have changed substantially over the years. At this time, NY State law requires that the ZBA make its decision based on weighing the benefit to the applicant against the detriment to the health, safety and welfare of the neighborhood or community if the variance is granted. And to make this analysis, the ZBA must specifically consider the following five factors:

It is important to note that – in the case of an Area Variance – the applicant does not have to satisfy all five of the above “tests”. The ZBA has to consider all five issues, but it then has to use its collective judgment to weigh the applicant’s potential gain against the neighborhood’s potential loss.

Here in the Town of Nelson, the ZBA tends to view an applicant’s variance request more favorably when it falls into one of three categories:

When applying for an Area Variance, the applicant should consider these issues, and come to the ZBA public hearing prepared to discuss how they may apply to his/her situation. For example, “I’d hate to have to remove this beautiful old maple tree, so I’d like instead to construct my garage only 19 feet from my side yard line (rather than the 20 feet required). If I can do that, then I will promise to remove the old (grandfathered) ugly deteriorating storage shed that’s been sitting out in front of the house for 50 years.”

The other kind of variance that an applicant may request is a “Use Variance”. This would be for the case where the applicant wants to use his/her property for some activity that is not allowed in that zone. For example, the applicant may want to build a gas station in an area which is zoned for residential use. For this type of variance, NY State law is much more stringent, and the ZBA is granted much less leeway in making its decision. In order to be granted a Use Variance, the applicant must prove “unnecessary hardship” by demonstrating that:

For each and every permitted use in that zone, the applicant is substantially unable to make a reasonable return from the property, as shown by competent financial evidence;

A critical difference here is that for a Use Variance the applicant must pass all four of these tests. There is no opportunity for the ZBA to use its judgment to weigh any benefits against any detriments. Getting a Use Variance is supposed to be hard. If that landowner wanted to put a gas station on his residential property, he/she would have to show (with financial evidence) that the property is basically worthless for any of the other uses that are allowed in that zone. And further, that it is a problem only for that parcel, and not for anybody else’s property in the neighborhood.

All business (with a few limited exceptions) transacted by any governmental bodies in NY State (including a town’s ZBA) must be done in public. In addition, any consideration of a variance application must include an opportunity for the public to speak at the ZBA meeting, and offer their input and opinions on the matter. Notices of these “Public Hearings” are advertised in the Hi Neighbor, and also mailed to all of the owners of properties nearby the parcel in question. The opinions of neighbors and other townspeople are vital to the ZBA’s ability to make judgments regarding the variance application in question. Town residents can speak in favor or against the application. They can even ask questions, and the applicant may respond with information important to the neighbors. The ZBA may make a decision at the same meeting, or it may choose to defer the decision to another meeting, sometimes pending the receipt of further information about the application or the property.

The ZBA consists of five members, and they are appointed by the Town Board. (The Town Board members were elected by the Town residents.) Decisions are made by a majority vote of the members. In certain cases – such as when the property in question is close to a County road – the variance application must first be considered by the Madison County Planning Board, and then the County’s decision is considered by the ZBA as well. In most cases the County Planning Board returns the application to the ZBA “for local determination”. However, if the County returns the application with the recommendation that the variance be “denied”, then the ZBA can overrule the County only if (a) that overruling vote is by a majority of the ZBA plus one (i.e. four votes), and (b) the ZBA must explain to the County what their reasons were for overruling the County’s recommendation.

The ZBA is sometimes seen as the bad guy (usually by an applicant who is denied a variance) because it appears that the landowner is being denied his/her right to do what he/she wants with his/her own property. Sometimes the neighbors become unhappy with the ZBA because a variance is granted. The important thing to keep in mind is that the real purpose of the ZBA is to safeguard the rights of all of the townspeople to ensure that the long-term goals and vision of the Town are preserved. The goal of the ZBA is to find creative “win-win” solutions such the applicant can achieve his/her goals while the Town avoids (or minimizes) any negative impacts on the community as a whole.

© 2020 - 2022 Town of Nelson, NY. All rights reserved.
The appearance of external hyperlinks does not constitute endorsement by the Town of Nelson of the linked web sites, or the information, products or services contained therein.
Site login...